I made this jewelry box for my mother a couple of years ago.  I am especially proud of it because it is so perfectly suited for her. I get my creative edge from my mom. When I was young, we were dirt poor, and she was always bringing home garbage and turning it into furniture, gifts, or decorations. She was amazing. Even as a child, I was really awe inspired by her ability to re-purpose garbage. This was in a time when taking home garbage was not considered a true credit to one's household! She filled our little apartment with the splendors of the world. There was a cable spool that she turned into a coffee table. She stained it, and filled the cracks with sea shells and macrame' trim, then sealed it with epoxy. She made turtle pillows to sit on, around that little table...turtles!!! She made planters out of old pop cans, and the list goes on. I have learned to see the garbage of human kind as an opportunity to stand apart from the norm. Thinking outside the box. I still offer a home to many of the things that she made, or fixed up, for my tiny pink childhood bedroom. This box however, is a store bought box from the Craft Warehouse. She would never accept a store bought gift, so I had to really age it, to sell her on the concept that it is a true gift. The top of the box is my favorite, because of my memories of her taking me to ballet class. 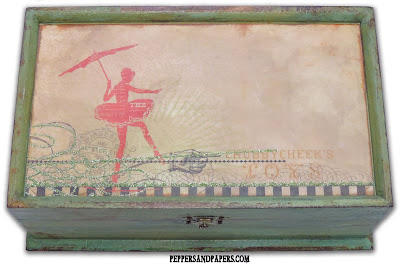 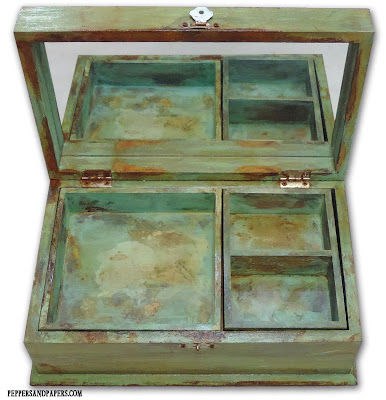 Unless you meticulously paint an intricate box like this, you can't know how hard it was to not ruin that mirror! The inserts slid in nicely, and I gave the entire box a nice coat of something that deactivates the rust and patina. I also put a clear coat of mod podge on the paper. 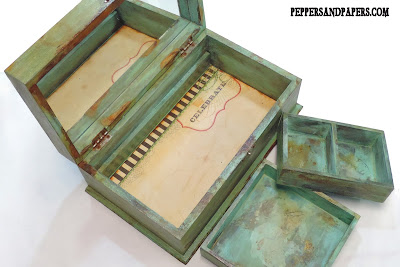 Did I mention this is real rust and patina? That's because I know you will scroll down to see the other projects. Eventually you will see a clear picture.

There is no photograph on this project, but I still call it "Memory Art" because I harnessed a particular time in my life, which was living in Mount Vernon, WA. My brother had just been diagnosed with cancer, and my mom put in some extra mom hours to make me feel special. One of those special gifts was a pretty pink jewelry box with a dancing ballerina in it. 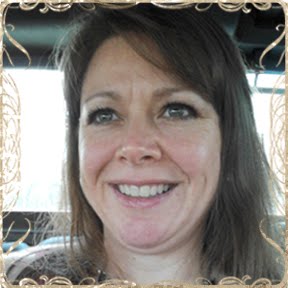 All content (including text, photographs, and design work) is property of Peppers&Papers.com. My original artwork is for personal inspiration only and may not be copied for publication or contest submission. Digital download TOU are stated with each item.

FTC Declaration - FTC16CFR, Part 255. In the spirit of full disclosure, I declare that I am a freelance designer. I currently receive or have received in the past products that I promote and endorse as a freelance designer for free or at a discount from the following companies: Amazon.com, and joann.com. Any product that I sell and endorse is a product I have used in my designs and recommend with complete honesty. As a freelance designer, I have the freedom to promote/endorse products that I personally use and love. I have not, nor will ever endorse a product that I feel is of substandard quality.